Generals’ Moms Power Comeback, Greyhounds Finish It in the Shootout 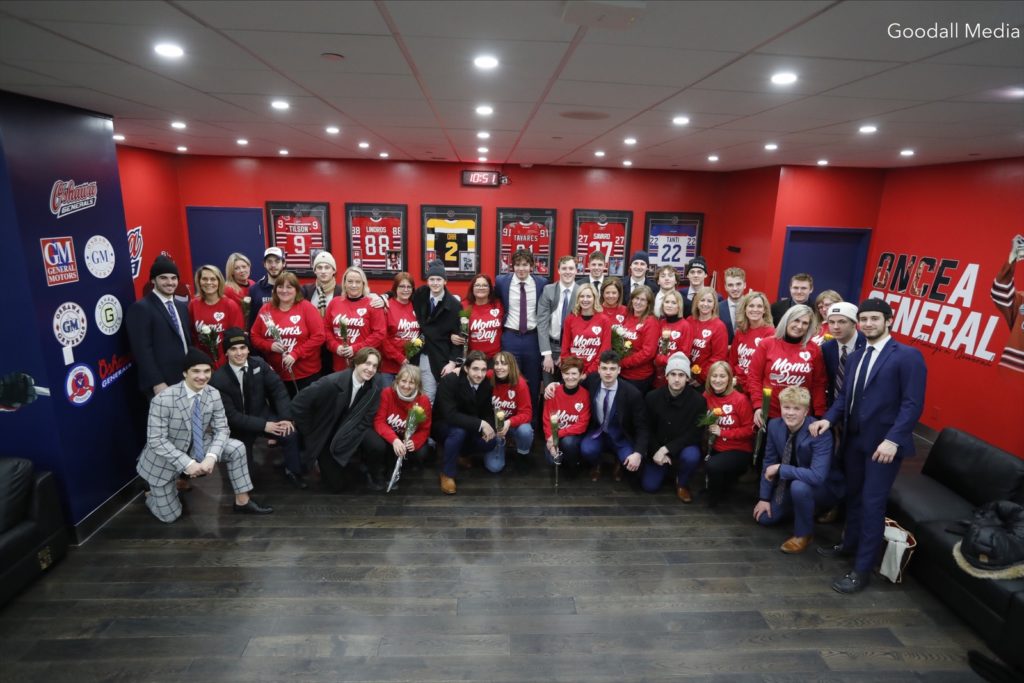 Tonight’s game was the “Mom Game” meaning the Moms of the Generals were in attendance. They were all presented with matching tee-shirts with the names and numbers of their boys on the back.

The first goal came just over five minutes into the period. Brett Harrison threw the puck on net, and Brkin stopped it initially. Defenseman Ryan O’Rourke – former Whitby Wildcat – tried to clear the puck out of the crease for the Soo, but he inadvertently banked it into the back of his own net. The first own goal in the TCC this season.

The Soo tied the game, then took the lead shortly after, O’Rourke redeemed himself assisting on Jaden Peca’s 15th of the season.

46.3 seconds remaining, Tullio fired a shot on goal which was deflected in by Phil Tomsasino.

The first ended with a tied score, even at two.

The Soo took back the lead in the midsection of the period. Jaromir Pytlik took a stick to the face in front of the net, and while he was wincing, Zack Trott fired a shot from the point that banked in off of him. The celebration was small as blood was dripping from his mouth, but nevertheless the Czech import recorded his 18th goal of the season. The Gens replaced Jordan Kooy with Zach Paputsakis following the 3-2 goal.

Nearing the end of the frame, Peca seemed to have put one past Paps on a pass deflected in off of Lleyton Moore’s stick, but after a review the Soo were offside on the play.  They succeeded in scoring, O’Rourke was back on the scoresheet with a goal, putting the Soo up 4-2.

Only seven seconds into the period, O’Rourke was sent to the sinbin for delay of game. Oshawa only needed 13 seconds on the powerplay for Brett Neumann to rifle a shot past Brkin.

Joe Carroll gave the Soo back their two-goal advantage with a finish on a passing play that beat Paputsakis.

Suni and Captain MacLean nearly connected for a goal on a two-on-one rush. MacLean deflected a saucer pass on goal which Brkin was able to get a pad on. MacLean stayed aggressive and was sprung on a breakaway, he deked Brkin and took a shot. Brkin made the initial stop, but McShane ended up pushing the puck over the line. Unfortunately for Oshawa, they bowled over Brkin to get the goal over the line – so the goal was disallowed for goaltender interference. Brkin was replaced following the play by Nick Malik.

The non-goal did bring some momentum as less than a minute later, while shorthanded, MacLean received a pass and he set Neumann up for a run and took the last Soo defender out of the play. Neumann hustled in on a breakaway and beat Malik to bring the game to within one goal.

.@Neumy25 just undressed the tendy… shorthanded… for his second goal of the game.

The Generals pushed hard to close out the game, and Neumann scored again, putting his 40th of the year on the scoresheet and sending the game to overtime tied at five. The second consecutive game that Brett Neumann has scored late in to give the Generals a point in the standings.

MacLean, Neumann and Vallati started the overtime for Oshawa. Neumann looked Keen to pot his fourth goal of the night. Vallati almost netted his first of the season with a big deke that beat Malik, but not the crossbar. Neumann and Nico Gross also had a near miss. Oshawa was dominant in the overtime, but were unable to seal the deal. It headed to a shootout.

Stat of the Night:

Kyle MacLean recorded his 100th assist and 150th point in this game.

The next Generals home game is on Family Day – Monday February 17th against the Owen Sound Attack at 2:05pm.