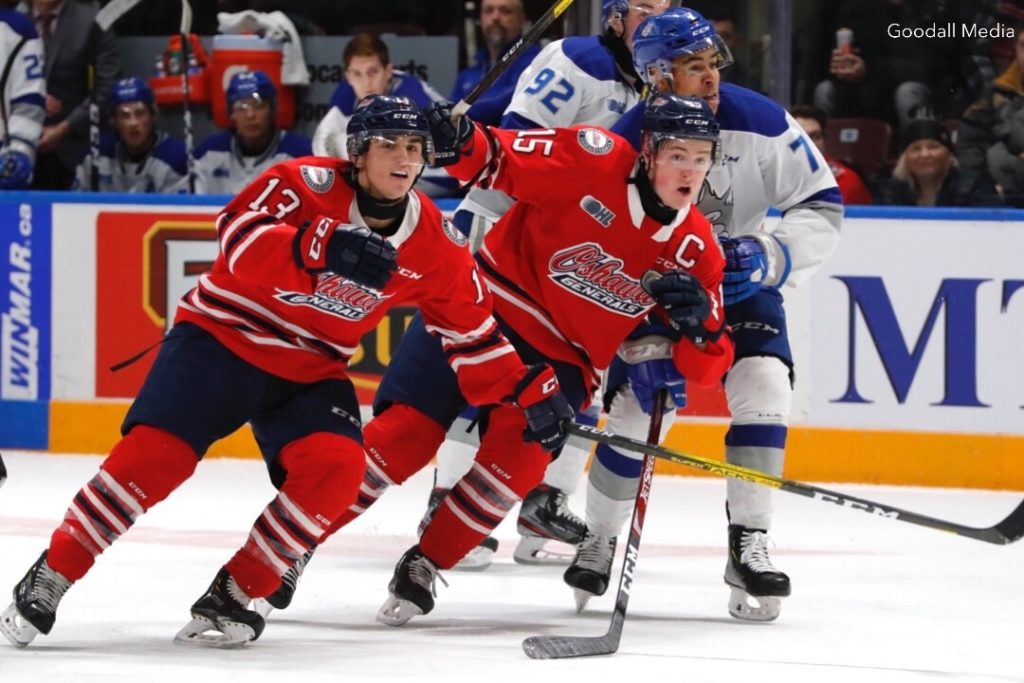 OSHAWA, ON – Sudbury comes to the Shwa for the final time these teams meet this season. The Generals won two out of the first three matchups, the last game finished 7-0 and was broadcast on national television on Sportsnet.

It didn’t take long for one of these high-skill teams to get on the board. It started with Nico Gross. Gross has scored twice on home ice in the month of February and both of those goals were the opening goal of the game. This one came just two and a half minutes into the period.

Sudbury answered quickly. Exactly ten seconds later, presumptive second-overall pick in the 2020 NHL Draft – Quinton Byfield – took a shot that Kooy got a piece of, but managed to squeak past the goal line.

Later in the period it seemed as though the Wolves would take the lead. Sudbury’s Owen Robinson got the puck at the end of a Wolves’ passing play and was left with a wide open net. He fired a shot that he hit the post and deflected out.

The Gens took the lead next. Allan McShane showcased his playmaking talent drawing two Nickeltown defenders to him and dropped a pass to Tomasino cutting into the Wolves zone. Tomasino sent it west to Tullio who fired an initial shot that was stopped, but showed his tenacity sticking with it. Macauley Carson tried to keep it out, but Tullio’s will won out in the end, 24th goal of the season. The goal was reviewed to see if Tomasino had contact with Weeks, but the goal stood. 2-1 Oshawa.

.@TylerTullio gets just enough to get it over the line!

Tullio was hoping to get his 25th of the year shortly after, finishing off a passing play from Lleyton Moore and McShane, he blasted a shot just through the crease. Tullio looked hungry out there. Moore was spectacular this period, he played like an olde tyme rover. Hoping up in the forecheck and being dangerous on the powerplay.

Sudbury outshot Oshawa 16-10, but the Gens were ahead on the scoreboard 2-1.

Oshawa came out guns blazing, lead by a strong individual effort from Brett Neumann. Neumann stole the puck from a Wolves defender that was being pressured by Captain MacLean. Neumann used his silky hands to weave his way towards the net and wristed number 35 of the year past Weeks.

Captain MacLean picked up the puck from a botched Wolves’ pass in the Gens zone. MacLean kicked in the afterburner, racing up the ice with Ryan Stepien on a 2-on-1. The captain opted to shoot and that was the right call. It was a snipe to the short side, that sent Weeks to the bench in favour of Christian Purboo. 4-1 Oshawa.

A couple of near chances for Oshawa through this period. Neumann made a pass to Stepien and Stepien nearly sent it past Purboo. Later, MacLean received a pass behind enemy lines as he was exiting the sinbin. It turned into a 3-on-0 with Brett Neumann and Ty Tullio. MacLean opted to shoot, but was stopped by Purboo.

McShane and Jack Thompson got tied up behind the Wolves net as the puck went back to the Gens end. They were so far behind that the play turned to 4-on-4. Suds defenseman Isaak Phillips capitalized with a wrist shot through Kooy’s five-hole.

The physicality ramped up in the final period. Dawson McKinney took a hit from behind from Chase Stillman. Ryan Gagnier stood up for his linemate and started throwing hands at Stillman. Gagnier came out on top.  Another fight took place in the final quarter of the period. David Jesus hit Brett Jacklin, Jacklin got up and went straight for Jesus.

Tullio looked hungry throughout the period, nearly besting Purboo with a shot in the second half of the period. He followed that up by controlling play in the Nickeltown zone and started a rush up the ice. He zig-zagged through the Wolves D, then dropped a pass to Moore who fired a wrister stopped by Purboo.

Oliver Suni hustled the puck up the ice on a 3-on-1 with Jacob Winterton and Brett Harrison. Suni dropped it to Winterton who fired his sixth of the season past Purboo. 5-1

Kooy played phenomenally throughout the whole game. Since he’s been a member of this squad, it’s apparent that the team in front of him has more confidence in its netminder. He proved his worth tonight.

Things continued to escalate in the “rock ‘em sock ‘em department.” Tye McSorley played his role as aggravator. He threw big hits, and successfully got into the heads of the Wolves players as seen by a plethora of shouting matches.

The final shots on goal were 41-28 for Sudbury, but your Generals came away with the victory.

The next Generals home game is Sunday, February 9th against Ty Dellandrea and the Flint Firebirds. This will be the second time they meet this year, and the only time that Flint will be in Oshawa for the season.