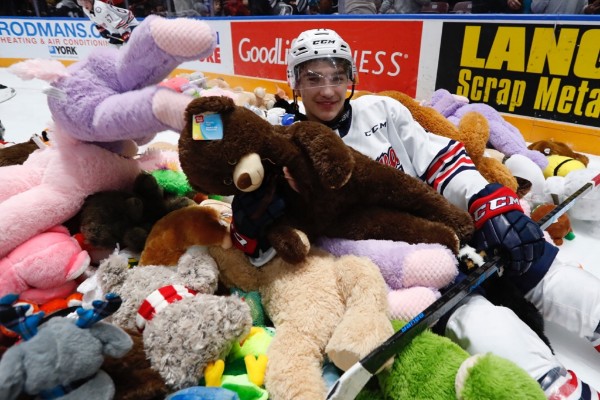 OSHAWA, ON – Your Oshawa Generals look to start winning again as they face off against the second-last placed Kingston Frontenacs. The Generals have lost their last 2 games, losing 7-4 against the Steelheads and 4-3 versus the Ottawa 67s.

The Frontenacs have a slightly better record in their past 10 games (5-4-0-1) than your Generals (4-6-0-0). But your Generals have swept their first three bouts of the season only allowing one goal in each game against the Frontenacs. They look to continue that trend.

The Generals dominated the first period. The anticipation of the 22nd Annual Teddy Bear toss loomed over the game. Bears were hoisted over children’s heads like Simba in the Lion King at every stoppage in play. Every Generals shot on goal felt like triple overtime in the Memorial Cup final, knowing that several thousand teddy bear lives were on the line. It took 13 shots and 13:44 before Ty Tullio finally made it rain. Giovanni Vallati made a quick pass over to Tullio who blasted a slapshot from the high left circle for his 11th of the season and his first goal in ten games.

After however long it takes to clear out 4,003 bears from an ice rink, the Generals got right back at it. Serron Noel, in his first game since November 22, made a pass to Allan McShane in the slot who flicked the puck over Propp’s shoulder to pick up his 10th of the season.

The Generals outshot the Frontenacs 20-5 throughout the first period and scored both of their goals on the powerplay.

The Frontenacs came out looking for blood and their pound of flesh came 26 seconds into the period. Dawson Baker scored on a play that was reviewed for a high stick, but ultimately was called a good goal.

The Generals would extend their perfect powerplay record this game to three-for-three with a nifty backhand goal beating Propp for his second of the game.

The Fronts powerplay would heat up after a David Jesus roughing call. Shane Wright broke into the Generals zone and fired a shot over Andrew MacLean’s shoulder.

The Generals perfect powerplay run came to an end, but wasn’t without its chances. A Nico Gross near goal was reviewed to make sure that it hadn’t crossed the goal line, and it stayed as  a no-goal.

Tullio would get back at it again scoring doing what he does best, launching a laser of a wrist shot on goal beating Propp on an angle that no one else in the arena thought possible.

The period ended 4-2 with your Generals outshooting the Frontenacs 34-15.

Mitch Brewer played a strong game in tonight’s match. Looking for his first goal of the season, he got a few rushes throughout the night, got some shots on goal, all while playing his brand of a reliable defensive game.

The Frontenacs would score a powerplay goal from Nick King for his third of the season. The Generals would spend 1:14 on a two man disadvantage. It would only take 33 seconds for the Fronts to even the game at fours.

The Generals took a big lead early, but the Frontenacs came back late to ensure that each team would get at least one point on the night.

Both teams got their fair share of chances including a great sequence of possession by Brett Neumann, Lleyton Moore and Serron Noel. But it wouldn’t be enough for either team to get the victory. It headed to a shootout. The game ended with 44 shots for the Generals, and 25 for the Frontenacs.

Stat of the Night:

All but one of tonight’s eight goals scored came on the powerplay.

The Generals next home game is Friday December 13 against Nick Robertson and the Arch-Rival Peterborough Petes.