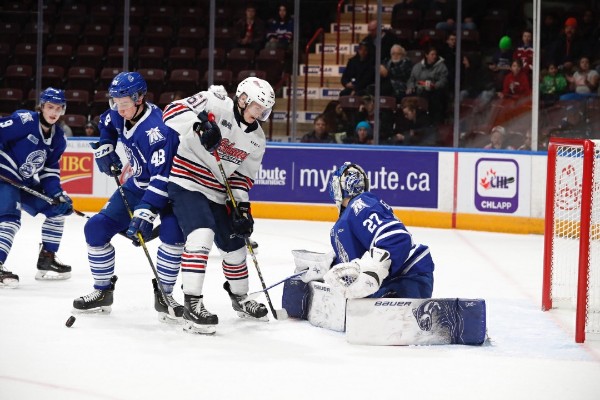 OSHAWA, ON – The Mississauga Steelheads come to town looking to beat your Generals for the first time this season. In their first two match-ups, the Generals have swept them thusfar.

Mississauga sat in the bottom-three of league standings heading into this match, and the Generals in the top-three.

Oliver Suni started off the scoring for the night, Brett Neumann slid a pass to Suni who cranked home a one-timer for his 8th goal of the season.

The Steelheads didn’t take too kindly to that, and responded quickly with a nifty goal on a pass from Cole Schwindt, behind the goal line, to Richard Whittaker to tie the game at ones.

The Steelheads also got goals from Calvin Martin and James Hardie. Both goals had assists from Steelheads leading scorer Thomas Harley.

The period ended 3-1 for the Steelheads, who outshot your Generals 13-8.

The Generals looked to crack a dent in ‘sauga’s lead, but were unsuccessful in getting any long standing offensive pressure in the Steelheads zone.

One line that played well for the Generals was Ty Tullio centering Allan McShane and Brett Harrison. McShane showed off his filthy hands and almost scored on a couple of occasions.

At 13:27 in the period, Ryan Gagnier picked up the puck at centre ice and stickhandled it into the Steelheads zone. He brought it around a D-man and rifled a wrist shot that beat Edmonds for Gagnier’s second in as many games.

The Steelheads answered quickly, as leading scorer Thomas Harley floated a wrist shot past Paputsakis for his third point of the night and his 11th goal of the season. The score was 4-2 Steelheads.

This period was a story of neutral zone turnovers, with not much happening for either team. The shots on goal ended 25-18 for the Steelheads.

Daniel Walker grabbed the puck and muscled his way through the slot and beat Edmonds with a backhand high on the glove side a beautiful goal and his second in as many games.

The Generals would tie the game as Oliver Suni intercepted a Steelhead pass in their zone, controlled it and slid it over to Captain Kyle who lasered a slapshot past Edmonds. And just like that, in a game where it seemed like neither team was putting much together, the Generals found a way to tie the game.

The Steelheads crushed that notion with a quick goal from William Portokalis – forcing the Generals to chase the lead again.

The Generals had two powerplay opportunities to tie the game, but alas they were unsuccessful. The Steelheads netted two empty-net goals to seal their grasp on the game.

The Generals next home game is Sunday, December 1 at 6:05pm. Your Generals will be taking on former-General fan-favourite, Nick Wong and the Kingston Frontenacs.