Generals Thwarted In Clash Against Knights 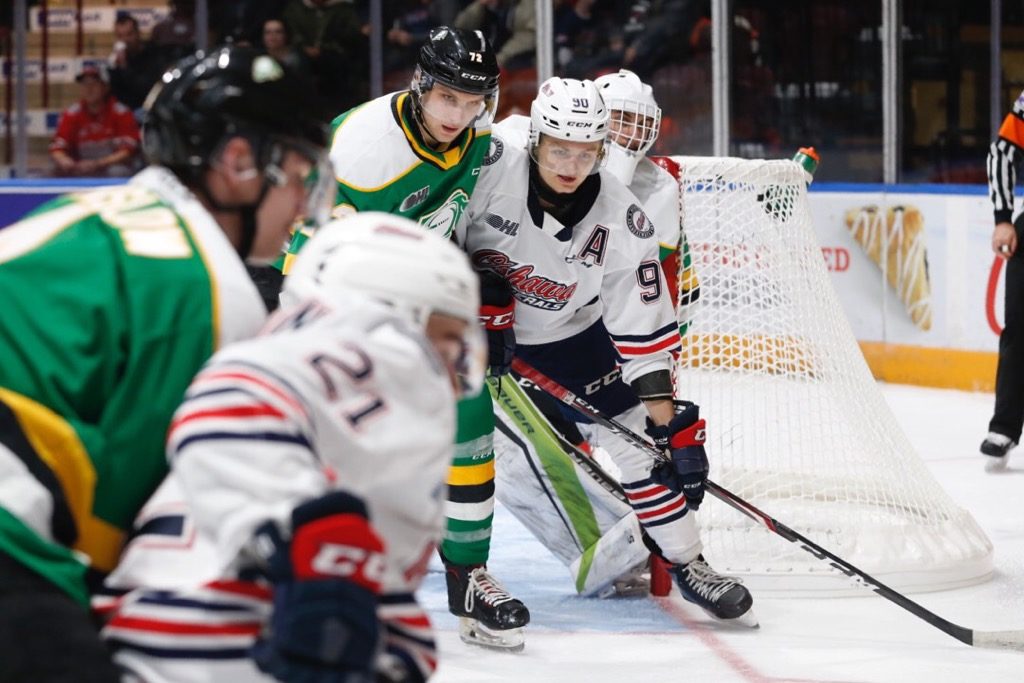 OSHAWA, ON – The London Knights came to town looking to take two-points away from your league leading Oshawa Generals. Both teams entered into this match riding streaks, with the Knights having a 4-0-0-1 record in their last 5 games and your Generals with a 3-0-0-1 record in their last 4. These teams only face twice a season, so there isn’t a ton of familiarity between the two clubs. Last season they split their season series – each winning one contest.

The game got underway and both teams were focusing on strong defensive play. Kyle MacLean set the tone early on with the hit heard around the arena on Kirill Steklov, who got up and made a beeline for the bench.

The Generals seemed to be making a conscious effort to make a return to the chip and chase style of hockey that brought them to the conference finals last season. This allowed them to use their collective work ethic to bring them opportunities.

A turnover on a Generals’ break-in followed by a cross-ice stretch pass sent Matvey Guskov on a break into the Generals zone. Guskov was left practically unchallenged as both Generals defenders had absconded to the bench for a line change. Guskov took his time bearing down on Generals goalie MacLean and beat him cleanly with a wrist shot to the glove side.

Shortly after, on a Generals’ powerplay, Kyle MacLean carried the puck into the Knights zone and launched a shot at the opening. The rest of the forwards crashed the net and on a play where the puck almost crossed the line several times. In a flurry of skates and sticks, Ty Tullio was the one to finally bury the biscuit evening the scoreboard at 1.

The score would not stay even for long. Knights leading scorer Connor McMichael crossed into the Generals’ zone with possession. He threw the rubber towards the net, but the puck was deflected up by Generals’ William Ennis and the puck rainbowed down deflecting off of Luke Evangelista past goalie MacLean. After a long review to determine if Evangelista had intentionally redirected the puck into the net with his glove, not enough evidence was shown to overturn the goal – so it stayed on the board.

The period ended 2-1 for the Knights with the shots even at 11 per side.

The Knights came out looking to carry their momentum from the first period onwards, but took it a bit too far. Jonathan Gruden looking to finish his checks shot a hard elbow to the head of Oshawa’s Nico Gross – putting the Generals on the powerplay. No scoring came of the man advantage, but the Generals controlled possession throughout.

Many chances were exchanged throughout the period, including a Knights 3-on-1 rush ending with a Billy Moskal shot laser-beaming off of the crossbar and high out of play on a wide open Generals orifice.

Captain MacLean was directed to the sin-bin after a slashing infraction. On the following penalty-kill Connor McMichael cranked a wrist shot past a screened Andrew MacLean, bringing the score to 3-1. Not long after, Serron Noel was also called for slashing which ended in a similar result. The Knights broke into the Generals zone with some tic-tac-toe passing, concluding with a nifty between the legs backwards pass from Gruden, below the goal line, into the slot to Chicago Blackhawks prospect Alec Regula who flicked his 6th of the year past MacLean. Knights Captain Liam Foudy also potted his fourth of the season on a breakaway with a forehand-backhand move in which he slid the puck through the five-hole of a moving Andrew MacLean.

Oshawa started off the period making a statement by swapping starting goalie Andrew MacLean out for Zachary Paputsakis. Paputsakis made some great saves in the first half of the period It took the Generals 11 minutes and 15 seconds into the period to get their first shot on goal. Tensions began to rise as the Generals frustrations began to manifest in strong physical play. Giovanni Vallati looked to spark his team late in the game throwing hands at Hunter Skinner, but went down quickly.

Other than some physical play from the Generals and a strong relief effort from Paputsakis, the third period was relatively quiet with no major chances for either side. With no more notches put on the scoreboard, the Generals would lose this battle in a 4-goal differential, despite out-shooting the Knights 29-28.

The next home game takes place on Sunday, November 10th when your Generals face off against the Kitchener Rangers! It will be our Remembrance Day game – so don’t forget your poppy!