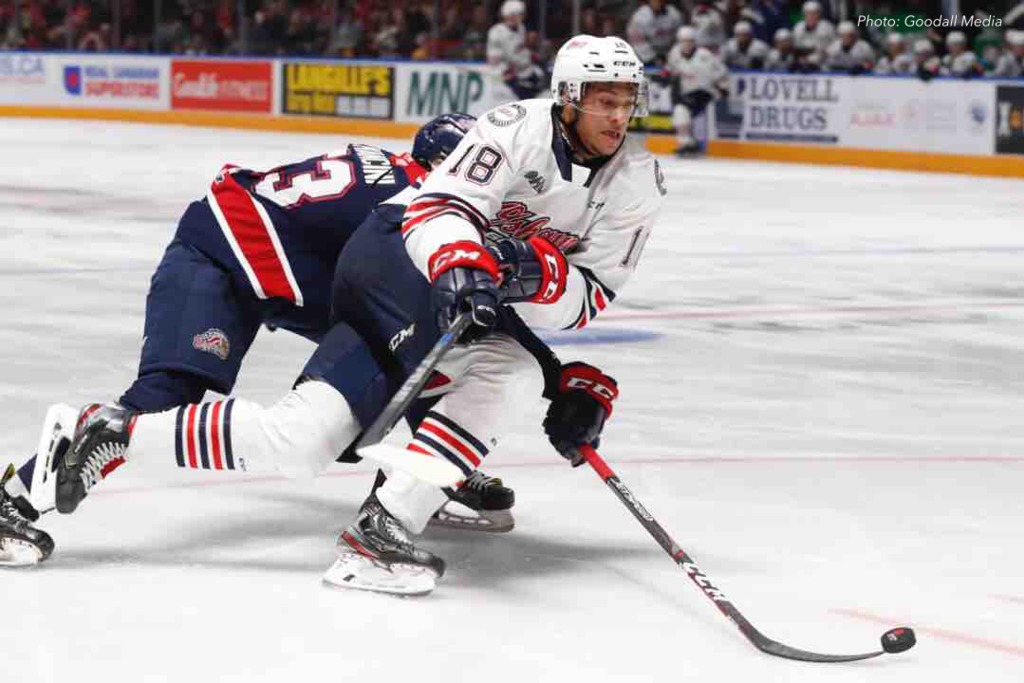 Tonight’s game would see the long awaited return of Generals captain, and last season’s recipient of the Heart of a General award, Kyle MacLean. His appearance in the pregame puck drop was met with thunderous applause – as Generals fans showed their love for their captain.

Both teams came out ready to play, and were very aggressive offensively. This fast paced match started with several near goals from both teams. Highlighted by a Serron Noel rush up the right side of the ice where it appeared like he had the puck on a string, fending off Spirit defenders all the way up the ice. Once over the blue line, Noel slid the puck over to Allan McShane who fired a one-timer from the slot, that was barely deflected away from the orifice by Spirit goaltender Tristan Lennox. Another was a  There were 11 shots taken in the first 10 minutes of action. Generals forward Ty Tullio shot the puck out of play for a delay of game penalty, putting the team on a penalty kill. The Spirit were aggressive, with quick passes and peppered Generals goalie, Andrew MacLean with shots. MacLean impressed with several big saves, but the Spirit offence were relentless. Spirit leading scorer, defenseman Igor Solovyov passed the puck over to Cole Coskey who fired a one-time shot through the five-hole of A. MacLean. The game ramped up in intensity, with the Spirit taking control of the game. Goalie MacLean played out of his mind in the first period and managed to keep several high percentage scoring chances out of the net. First, he stopped a Cole Perfetti wraparound, that seemed sure to go in, then he stopped a hard shot from the slot which put his body into a position that would make anyone that was not a gymnast cry in pain. The period ended just 1-0 for the Spirit, but the Spirit were firmly in control beating with 19 shots to the Generals 7.

The Generals came out stronger in the second, looking to even up the game. It only took 1:43 for forward Brett Neumann intercepted a pass deep in the Spirit zone, put a deke around a Spirit defenceman and fire a nifty backhand right upstairs on a surprised Lennox. A Spirit check to the head would put the Generals on the powerplay. As the penalty was about to expire, the Spirit broke into the Generals zone and Spirit captain Damien Giroux intercepted a breakout pass through the Generals slot and fired a slap shot over the glove of Andrew MacLean, taking the lead back for the Spirit. As the midway point of the period was hitting, tensions escalated even more. The Generals captain, Kyle MacLean, showed his grit as he stood up for himself – after drawing an interference penalty – by taking on a Jake Goldowski in a tussle at centre ice. This earned each of them a 2 minute roughing penalty, but also put the Generals on the man advantage. On the ensuing powerplay, rookie Brett Harrison found defender Nico Gross at the faceoff dot in the offensive zone, who tied the game with a wrist shot past for his 4th goal of the season, matching his career high in goals set in 2017-18. The Spirit seemed determined to gain the lead back in the closing minutes of the period, firing shot after shot on net – but Andrew MacLean was vigilant. The score was 2-2 going into the third, with the Spirit almost doubling the Generals in shots at 32-17.

The third period started with both teams exchanging chances, clearly both teams were looking to take advantage on the scoreboard. At 2:27 into the game Andrew MacLean took a shot awkwardly, and play stopped as MacLean had a visit to the crease from the Generals trainer. MacLean showed his toughness as he got up, shook it off and stayed in the game. At 3:26, Serron Noel brought the puck into the Spirit zone and slid the puck to McShane in the slot. McShane fired a shot that left a juicy rebound that was picked up by Noel as he circled the net. Noel was patient with the puck as he headed around the circle, waiting fo the right hole to open up. He changed the balance of power with a shot over the glove of Lennox, giving the Generals their first lead of the night at 3-2. The Generals really took control of play after gaining the lead, they threw the body, were aggressive on the forecheck and backcheck, and they were willing to take a hit to make a play. A Spirit double minor for high sticking on Generals Jacob Winterton at 11:07 put the Generals back on the powerplay. It only took 38 seconds for Serron Noel to get at it again, deflecting in a Brett Neumann pass as he jockeyed for position in front of the Spirit net, making the score 4-2 Oshawa. The Spirit would get a quick goal from Cole Coskey, at 19:40, but it wouldn’t be enough. The Generals brought home their seventh straight with a final score of 4-3.

Stat of the Game:

Generals forward Allan McShane has scored a point in each of the past five games, with three of those games being multi-point games.

The Generals will be out of town next weekend, with the next home games coming on October 18 – vs the Sarnia Sting, and October 20 – vs rival Peterborough Petes.