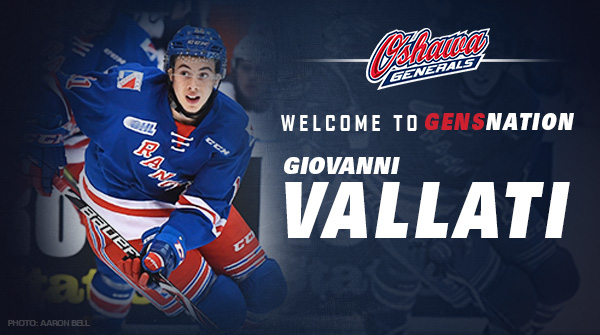 Oshawa, ON- The Oshawa Generals announced today they have acquired defenceman Giovanni Vallati from the Kitchener Rangers.

In exchange, the Rangers will receive:

“Very exciting time to get a player like Giovanni on our roster” said Vice President and General Manager Roger Hunt after completing the trade. “This was an opportunity to add another NHL prospect to our defensive core and he will be a huge part of our team for the next couple seasons.”

Vallati was drafted by the Rangers 16th Overall in the 2016 OHL Priority Selection. The Ottawa, ON native will be heading into his third Ontario Hockey League season when he joins the Generals. In his sophomore season, the left-shot defenceman recorded three goals and 23 assists for 26 points. This past June, Vallati was drafted in the 5th Round, 153rd Overall by the Winnipeg Jets at the 2018 NHL Entry Draft in Dallas, TX.